Although the current cosmological paradigm – \(\Lambda\)CDM – is remarkably successful at explaining a great range of observations, a number of puzzles suggest that it may need to be extended. Generic extensions introduce new fields alongside the metric tensor of General Relativity, which couple to matter and induce new interactions between objects. Called “fifth forces” because they supplement the four known fundamental forces of nature, these new interactions are the smoking guns of new physics.

Physicists have been searching for fifth forces in the Solar System and laboratory for several decades, placing ever tighter constraints on their strength and range. Recently however it’s become clear that many classes of extensions to \(\Lambda\)CDM would not be expected to produce observable deviations from General Relativity in these regimes. This is due to a property of the field equations known as screening, which implies that the fifth force effectively decouples from matter in high density regions such as the interior of the Milky Way. To probe the fifth forces of screened theories we need therefore tests beyond the Milky Way, in the low density environments of the Universe at large.

A first step to testing screening is to identify which regions of the local Universe would be expected to be screened or unscreened in specific theories, based on the regions’ densities or gravitational field strengths. To do this, we combined the BORG-PM algorithm1 with a model of small-scale structure to reconstruct three measures of the gravitational field – Newtonian potential, acceleration and spacetime curvature – out to redshift \(\sim0.05\) 2. Figure 1 shows a slice through the Newtonian potential field: blue regions are those of weak gravitational field, which are most likely to harbour unscreened galaxies within which a fifth force is manifest. Newtonian potential is specifically relevant to the “chameleon” and “symmetron” screening mechanisms; acceleration and curvature govern the degree of screening under the “kinetic” and “Vainshtein” mechanisms respectively. Our maps – publicly available on Desmond’s website – provide each of these screening proxies at any point in space within \(\sim 200 h^{-1}\) Mpc. 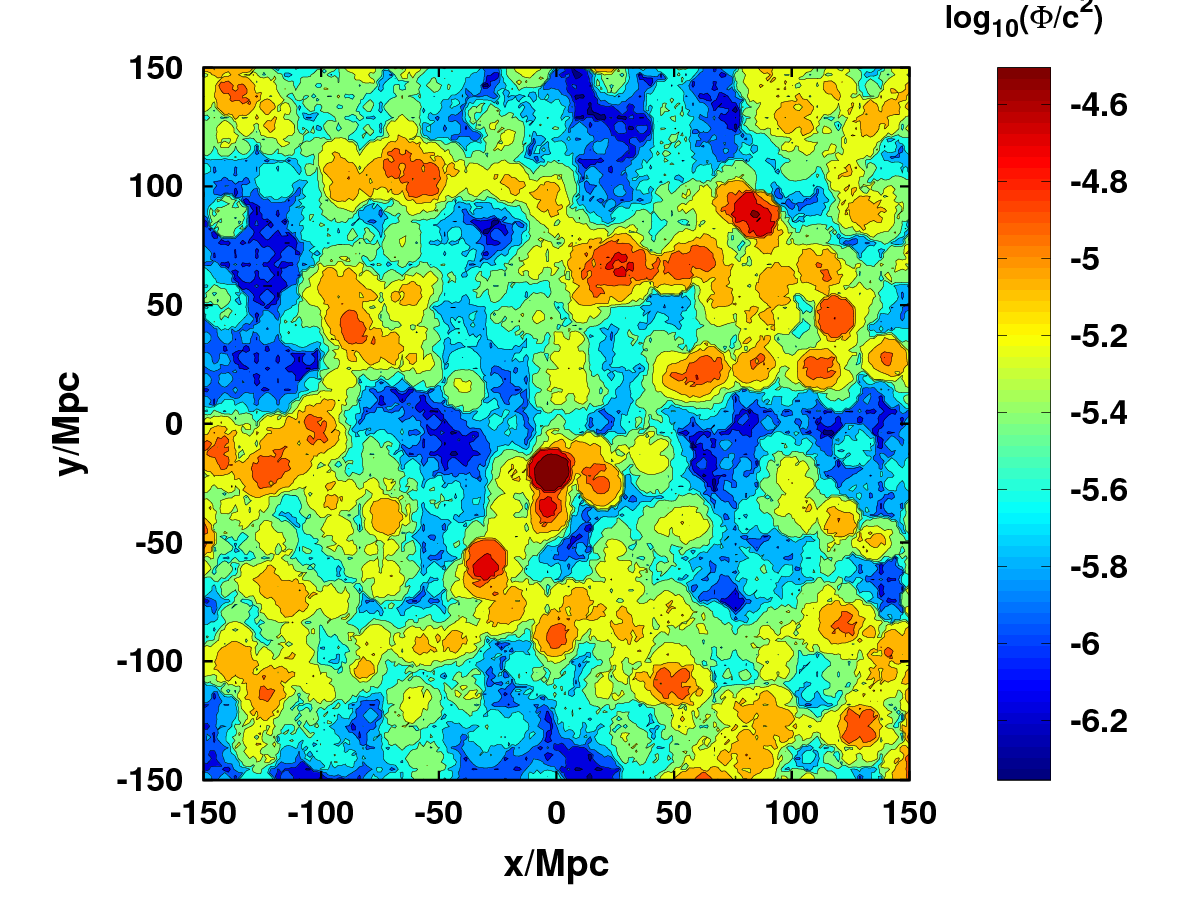 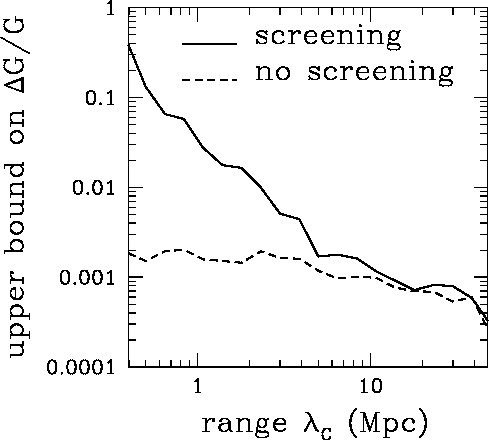 A conservative analysis of the separation of stars and gas in galaxies in different gravitational environments produces precise constraints on the strength and range of a screened or unscreened fifth force. The region above the line is excluded. From Desmond et al 2018(b)3.

Now knowing which galaxies ought to be screened and which not, we can search for observational differences between them. These differences arise because stars in otherwise unscreened galaxies are themselves dense, and therefore self-screen. Thus while gas and dark matter interact with surrounding mass via a fifth force, the stars do not, so that the various components of galaxies fall at different rates in an external field. In particular, the stellar disk lags behind the gas disk and dark matter halo in the direction of the exernal fifth force field. This has two observational consequences, which we have studied in detail:

In both cases we achieve sensitivity to fifth forces with strength ~1% that of gravity, for ranges \(\sim0.5-50\) Mpc. Assuming highly conservative observational uncertainties we place the strongest constraints to date on fifth-force properties at the scale of galaxies and their environments, as shown in Figure 2. Using a more realistic model for observational uncertainties, the analyses provide independent yet fully-compatible evidence for a screened fifth force of range \(\lambda_C \simeq 2\) Mpc and strength \(\Delta G/G_N \simeq 0.02\) (Figure 3). This is well below the detection threshold of any previous experiment. We caution however that baryonic physics may confound this inference; we will explore this in future work, alongside devising novel probes of other types of fundamental physics with our inference framework, such as dark matter self-interactions (Pardo et al 2018, in prep). 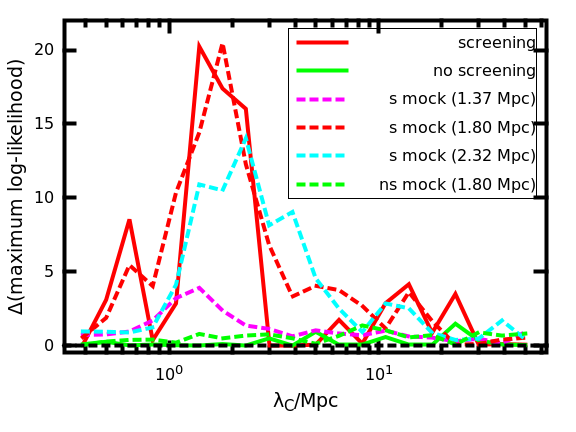 A less conservative analysis suggests the action of a screened fifth force operating on scales $\sim2$ Mpc, shown here from the study of galactic warps. The plot shows the increase in goodness-of-fit of the model over General Relativity as a function of fifth-force range. The dashed lines show the results of analysing mock data with a fifth-force signal injected by hand. From Desmond et al 2018(d)5.