The exploration of the Universe at large relies mostly on the use of large galaxy surveys, i.e. compilation of the position and optical properties of galaxies in the sky. These surveys are either photometric, when only wide band observations are available, or spectroscopic, for which the emission of each galaxies have been finely described at different wavelength. From the luminous properties we derive the ‘redshift’ of each galaxy, i.e. its total apparent receding velocity.

Sophisticated and optimal data analysis techniques for cosmological inference from galaxy redshift surveys are in increasing demand to cope with the present and upcoming avalanches of cosmological data (e.g. Euclid, DES, DESI), and therefore optimize the scientific returns of the missions. This is all the more critical that each survey brings us closer to a full census of the galaxy distribution in our patch of Universe. We are thus running out of exploitable information on our Universe. In our latest article1 (also slides are availables2), we present, for the first time, a non-linear Bayesian inference framework to constrain cosmological parameters using a kind of anisotropy visible in galaxy redshift surveys, via an application of the Alcock-Paczyński (AP) test. This novel approach extracts several orders of magnitude more information from the cosmological expansion compared to classical approaches, to infer cosmological parameters and jointly reconstruct the underlying 3D dark matter density field.

A closed trajectory in the (\(\Omega_{\mathrm{m}}\), \(w_0\)) plane, depicting the cosmological dependence of the cosmic expansion history for a fixed set of density initial conditions and powerspectrum.

The Alcock-Paczyński (AP) test is a cosmological test of the expansion of the Universe and its geometry. The main advantage is that it is independent of the evolution of galaxies but depends only on the geometry of the Universe. The assumption of incorrect cosmological parameters in data analysis yields distortions in the appearance of any spherical object or isotropic statistical distribution. The AP test provides a pathway to exploit this resulting spurious anisotropy to constrain the cosmological parameters. In this work, we invoke the AP test to ensure that the underlying geometrical properties of isotropy of the Universe are maintained. As such, the key underlying assumption relies purely on the geometrical properties of the cosmological principle.

To encode the AP test, we developed an extension to the hierarchical Bayesian inference machinery of BORG (Bayesian Origin Reconstruction from Galaxies), originally developed for the non-linear reconstruction of large-scale structures. Our physical model of the non-linearly evolved density field, as probed by galaxy surveys, employs Lagrangian perturbation theory (LPT) to connect Gaussian initial conditions to the final density field, followed by a coordinate transformation to obtain the redshift space representation for comparison with data. We implement a sophisticated Hamiltonian Monte Carlo sampler to generate realizations of 3D primordial and present-day matter fluctuations from a non-Gaussian LPT-Poissonian density posterior given a set of observations. Our augmented framework with cosmological applications is designated as ALTAIR (ALcock-Paczyński consTrAIned Reconstruction).

The essence of this AP test can be summarized as follows: The Bayesian inference machinery explores the various cosmological expansion histories and selects the cosmology-dependent evolution pathways which yield isotropic correlations of the galaxy density field in comoving coordinates, thereby constraining cosmology. In particular, we sample the present-day values of matter density and dark energy equation of parameters, i.e. \(\Omega_{\mathrm{m}}\) and \(w_0\), respectively. The reconstruction scheme employed in ALTAIR is depicted in Figure 2. 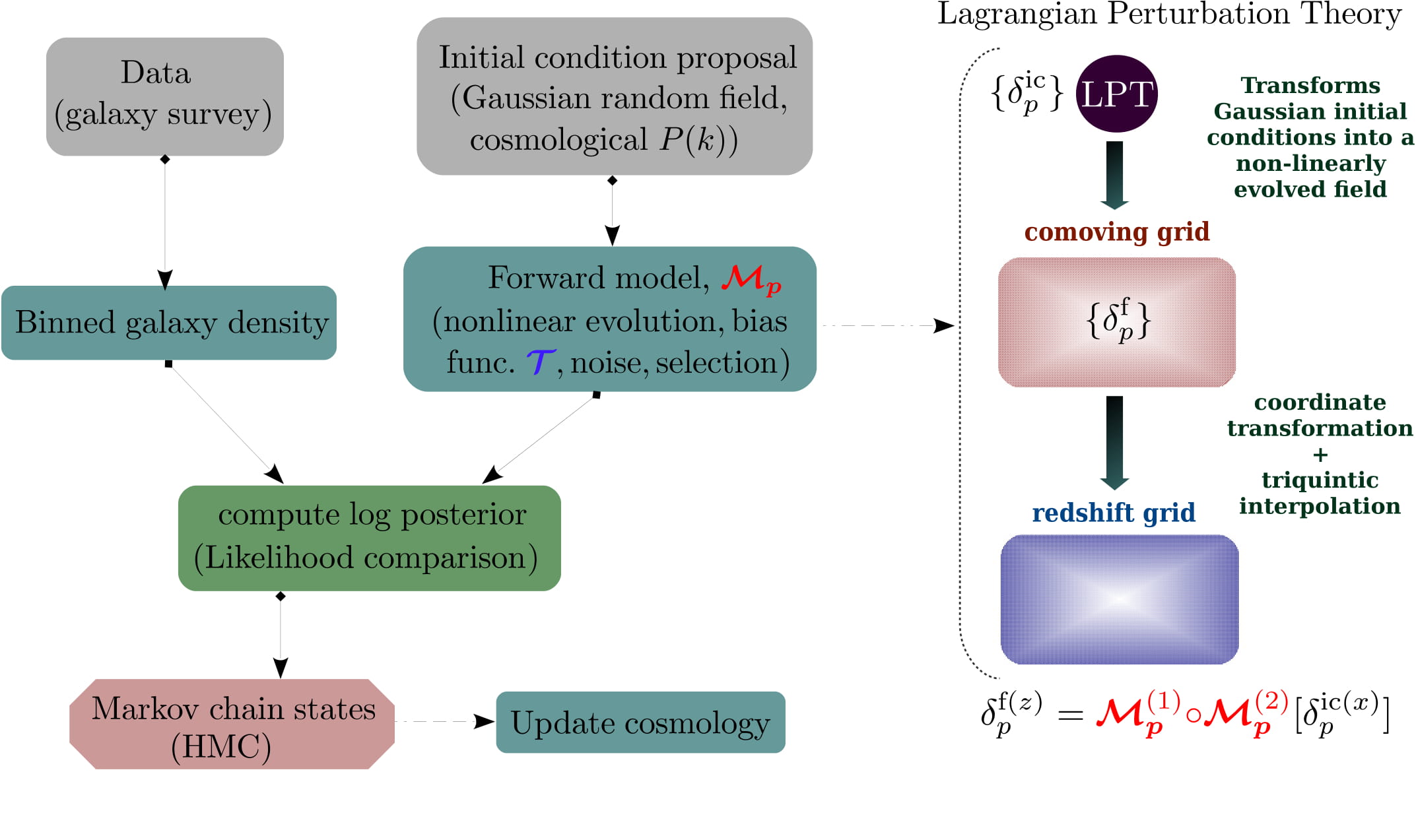 This schematic illustrates the reconstruction pipeline of ALTAIR. The forward model consists of a chain of various components for the non-linear evolution from initial conditions and the subsequent transformation from comoving to redshift space for the application of the AP test. This consequently transforms the initial density field into a set of predicted observables, i.e. a galaxy distribution in redshift space, for comparison with data via a likelihood or posterior analysis.

We have showcased the performance of ALTAIR on a mock galaxy catalogue, that emulates the features of the SDSS-III survey. The main aspects of our investigation are summarized below.

The marginal and joint posterior distributions for the cosmological parameters are displayed in Figure 4, demonstrating the capability of ALTAIR to infer tight constraints. Our AP test fully exploits the high information content from the cosmic expansion as a result of probing a deep redshift range, where the distortion is more pronounced.

The marginal and joint posteriors for \(\Omega_{\mathrm{m}}\) and \(w_0\) illustrate the potential of ALTAIR to yield tight cosmological constraints from present and next-generation galaxy redshift surveys.

With baryon acoustic oscillations (BAOs) being a robust standard ruler, the AP test has been utilized for the simultaneous measurement of the Hubble parameter and angular diameter distance of distant galaxies. Therefore, as a comparison, we depict the corresponding constraints obtained via BAO measurements from the SDSS-III (Date Release 12) in Figure 4. These BAO constraints have not been combined with Planck measurements, which would significantly tighten the constraints. Nevertheless, this highlights the significant potential constraining power of our AP test, compared to standard BAO analyses, while being at least as robust. 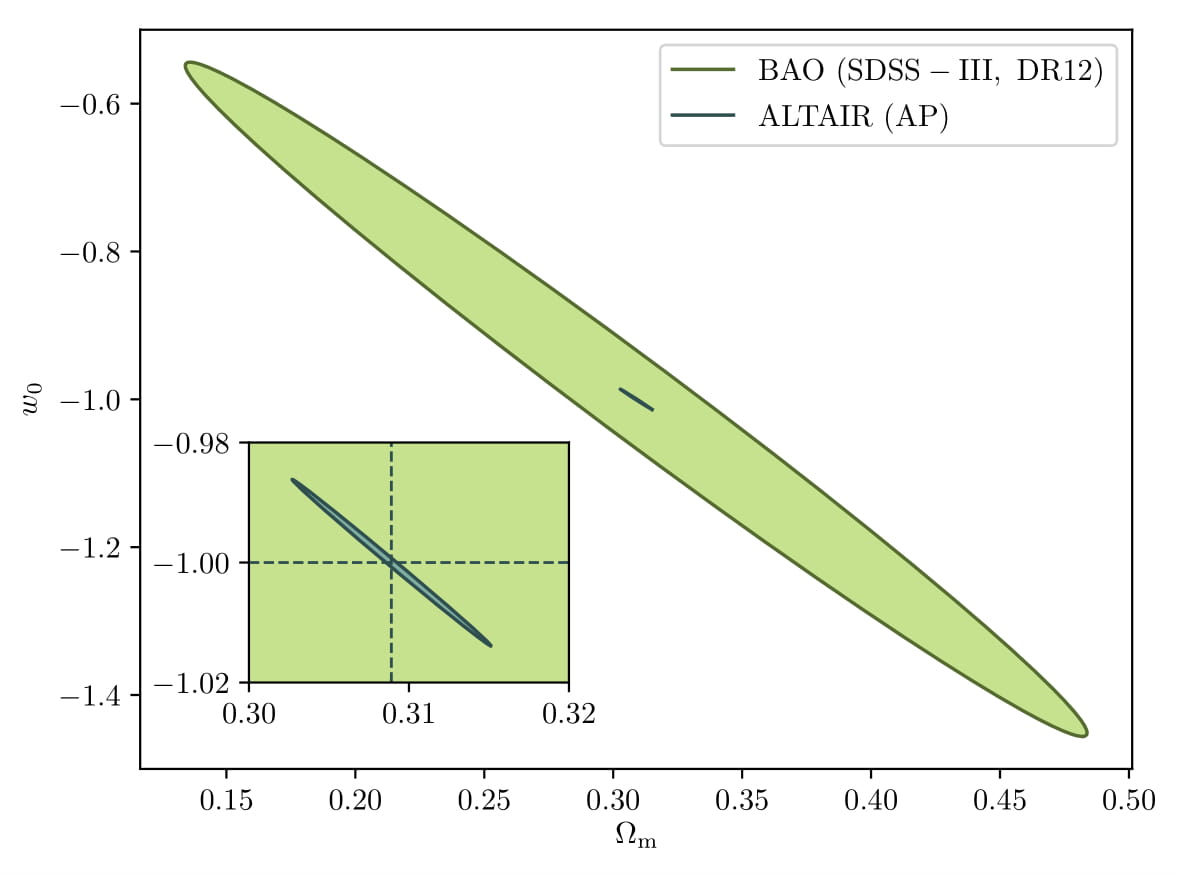 Comparison of cosmological constraints from BAO measurements (SDSS-III, DR12) and our implementation of AP test in ALTAIR. The ellipses denote their respective 1-sigma confidence regions, centered on the fiducial cosmological parameters. Note that the BAO constraints have not been combined with Planck CMB measurements. This demonstrates the potential constraining power of our AP test compared to standard BAO analyses, with the inset focusing on the ALTAIR constraints where the fiducial cosmology is depicted in dashed lines.

Robustness to a misspecified model

The main strength of our implementation of the AP test lies in its robustness to a misspecified model and its inherent approximations, thereby near-optimally exploiting the model predictions, without relying on its accuracy in modelling the scale dependence of the correlations of the field.

We demonstrated this robustness of our AP test by employing a modified prior power spectrum in the inference procedure. By adopting a different cosmology (\(\Omega_{\mathrm{m}} = 0.40\) and \(w_0 = -0.85\)), we modify the shape of the power spectrum, and subsequently apply ALTAIR on the same mock catalogue. As shown in Figure 5, we recover the fiducial cosmological parameters employed in the mock generation, although with slightly larger uncertainties than for the original run by roughly 15%. This test case therefore explicitly highlights the robustness of our implementation of the AP test to a misspecified model since it does not optimize the information from the scale dependence of the correlations of the density field, but rather from the isotropy of the field.

Same as Figure 3, but employing a different prior power spectrum (\(\Omega_{\mathrm{m}} = 0.40\) and \(w_0 = -0.85\)). By recovering the fiducial cosmological parameters employed in the mock generation, this test case explicitly highlights the robustness of our approach to the shape of the prior power spectrum adopted. The corresponding uncertainties are slightly larger than for the original run by around 15%.

The robustness of our method to model misspecification yields another key aspect, which is that the cosmological constraints show extremely weak dependence on the currently unresolved phenomenon of galaxy bias. This yields two crucial advantages: